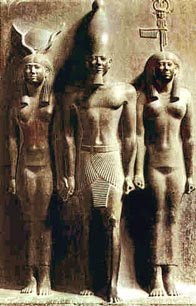 The original African Trinity which predates organized religion by 1000's  of years is as shown. Asset (Mary), Assaur (Joseph) & Heru (Jesus). Eve was NOT the first woman made by God. Adam's first wife, Lilith was made from the very dust God created Adam, making them equal. Adam wanted dominion over Lilith, but Lilith rebelled. She left him and was demonized for being independent. God then created Eve from Adam's rib, giving him power over her. Lilith is never mentioned in your bible. They fail to teach you that Jesus was African or that the Garden of Eden is in Africa. Much like our textbooks in school, they omit the truth. Africans created pi (3.14) and used the formula to build pyramids. We were kings and queens. No one acknowledges that Blacks were the first beings on Earth. The melanin in our skin gives us rhythm and we are better spoken because of it. You don't believe my words good. Fact check it and thank me later.

Heru referred to as Horus by the Greeks was depicted by the sun. We often see him with a sun behind or untop of his head. Now he was a deity not a god. The African spirituality believed in one main GOD but many deities which are reverred entities for parts of nature and life. 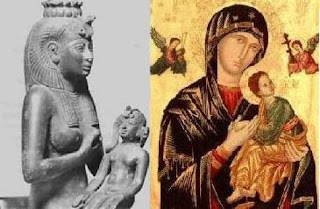 You don't see it yet? Well let's look at prehistoric Assaur (Mary) and Heru (Jesus) versus the Eurocentric version.
What's older? The one on the left by 1000s of years 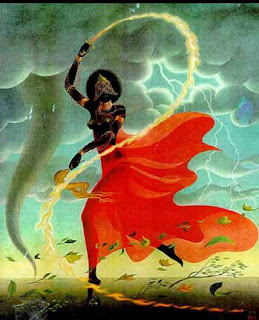